By the end of the year the species of the “Truck lover” will become slowly endangered due to the insane prices of what is used to make the truck go “VROOM” Gas prices will end up as high as 4 dollars a gallon, if that. Truck people, we need to unite and come up with a solution for this insanity.

No way in hell will you see me in a fruity hybrid or civic. Trucks are a lifestyle, I will go fight that war myself if it means I get to keep my truck.

Here’s to Erik Buell, his first bike was a two-stroke 4 cylinder GP bike.

Our friend Mic Williams has built this car over the last 8 years and he took us for a ride on Sunday. The car has all the period touches for a 50′s style rod – Flathead V8, Halibrand quick change differential, 3-speed truck transmission – Mic even went so far as to make sure that the -bolts- were the right style that would have been used in the 50′s. Incredible!

Go see it, and buy it from him.

Rolling hard in the hood

That’s right, we roll hard. Word to my kids mother yo.

Seriously, send a good word since she had another little gangsta on Saturday.

While this ends in a massive fail, it still has me thinking… maybe juice it up a bit by using a real motorcycle instead of a scooter, a bigger ‘goround’ part, maybe on-board video and we could have a whole new sport

Captain Obvious has a little trouble

From thatwillbuffout - It seems that Captain Obvious has had a little trouble reading the sign that was affixed to the back of his SUV. Too bad, now he will be mocked on the interwebs.

We helped get Darth Vader into a wedding dress 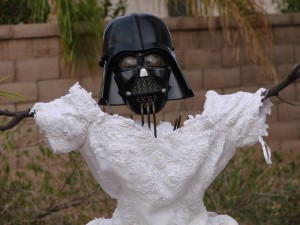 And many more to come. He is taking suggestions if you have any, just leave a comment on the blog. Our role? We just helped set up the blog, and hosted it.

Honda to kill Ridgeline – unless they don’t

Filling the interwebs with rumors, fear mongering and FUD the USA ToDay today talks about the possibility that Honda might kill the Ridgeline.

Why? Because this ugly chick truck hasn’t sold very well in the last two years. (that line was for you Jessica). Of course, NO TRUCK has sold well in the last two years so what the hell is the difference. It is selling better than the Hummer H2 so Honda should be happy. At the very least if they stop selling it they don’t get their investment back so why not just run that model forever like Ford has done with the Ranger platform?

This car was seen producing a lot of smoke and thus caused the police to close down the road to ensure the safety of bystanders. It was apparently a case of unintended acceleration of a Scion, which is made by Toyota.

According to the latest pricing information, the new HD with revised heavy-dutiness will be priced lower than the SuperDuty – by a whopping $35 ……… or about enough for 10 gallons of diesel. Which is really nothing. So thanks to the USATODAY I spent a few minutes reading the article on truck pricing and then another couple on this blog entry.

Of course, if you really think about it – the difference in pricing between “Super” and just “Heavy” is about 1%. Who wouldn’t pay that to upgrade to Super??

I await comments on my intelligence below.

Please watch out for flying Buicks at road crossings

What do you do with a Cherokar? Get some friends and some microphones and make music of course!

Lift Kits for Smart Cars – why?

We had a good time at the SEMA show looking at all the nice things, and then we would occasionally find ourselves muttering – WTF? (but, the full words not the acronym)

Daystar is now making a lift kit for the Smart Car, which begs a “why, for the love of all things holy, would anyone do that?” But what do we know? We like to lift trucks, not cars. We also have hated Smart Cars for a while, so we are not the most even handed of judges. Maybe there is a huge lifted Smart Car movement out there that we have no knowledge of . And don’t want any of either…

Why would you lift a Smart Car

Aptera has more trouble – this time with the battery

Today there has been a lot of talk flying around about Aptera and its troubles – Autoblog Green talked about it running out of money, Wired brought up the issue first, and Popular Mechanics got in touch with the big brass to find out what the difference was between a long vacation and getting laid off.

We here at Truckeo know the truth – or at least are willing to make up a close facsimile of it. We know the real issue is the fact that the battery died on the Aptera at SEMA – and even the mighty power pack could not get it moving. With the embarrassment of the little control battery upfront needing a charge, the company is now in big trouble. Even electric cars can’t just run on pixie dust and press releases, and so it was with the Aptera. The little battery in the front would let the big battery in the back work, so the car was stuck until it could be charged up. I heard at least one Las Vegas teamster declare that he would never buy an Aptera after seeing that. Of course he was 6’7″ and 300 lbs, so he would never fit into it anyway.

Also, we think it is a little ugly without the front tire covers on, don’t you?

Battery charger supplied by Star Billet . While you are here, why not buy something nice for your truck, since you can’t have an Aptera anytime soon?

This was a concept I couldn’t wrap my head around —

A Toyota Hilux in Bangkok with a misspelling of the Enola Gay on it, and a confederate flag with swastikas . Driven not by an asian hating skin head bent on the restoration of  the Reich, but instead by a small, smiling Thai woman who cooked food at a roadside stand.